Without capital, a small business’ journey ends before it even begins. Making sure that journey has a chance to flourish is what Angela Laperriere has been doing since 2011. Angela, better known as Angie, began her career with South Eastern Economic Development Corporation (SEED) as a marketing intern in 2010 prior to finishing her senior year at the University of Tampa.  After graduating in 2011, she was hired full-time as the marketing and business development officer. The position engrossed her in SEED’s lending program which paid dividends when she became involved with the lending side in 2012.

“I’ve had the pleasure of witnessing Angie grow as a lender and ally to small businesses. As she became more involved with SBA lending, we began seeing more of her and it was easy to identify the passion she had for the process,” said SBA District Director Mark S. Hayward. “You could tell that whomever she was working with or whatever loan she was trying to get approved, she was fully invested. She cares about the people she is working with and she believes in them. I think that is something we often overlook in the startup process… having people behind the small business owner who believe in them and believes in what they are trying to achieve. That goes a long way,” he added.

Since joining the lending team in 2012, Angie has closed 278 small business loans for over $16 million, creating 1,204 jobs. Of those loans, 71 were made to Rhode Island small business totaling approximately $4 million and creating 262 jobs. Angie has also led the charge for SEED as an SBA micro lender, with her efforts pushing SEED to the top of the micro lender list culminating in SEED being name the SBA Rhode Island Micro Lender of the Year from 2012 to 2016 and again in 2019.

“Angie’s commitment to working with entrepreneurs and small businesses is evident in everything she does,” said Susan E. Murray, Executive Director of SEED Corporation. “Angie is an advocate for her clients and champions their business financing needs, working tirelessly to prepare them for success. Angie is a strong voice for small business in Rhode Island and Southeastern Massachusetts!”

While lending is her primary focus, it is by no means the only way Laperriere helps the small business community. An active member in the SBA resource partner network, Angie regularly participates in financing panels, lender roundtables, accessing capital workshops and various other small group presentations in conjunction with SBA resource partners like the Small Business Development Center, SCORE, and the Center for Women & Enterprise. In her almost nine years at SEED, Angie has participated in, presented, or taught over 325 educational sessions and assisted over 4,400 entrepreneurs in their quest of small business ownership.

“I nominated Angie for the SBA’s Financial Services Champion Award because she is incredibly hardworking and cares deeply about the people she is assisting to start or grow their businesses,” said Tamarah Bacon, Assistant Vice President of Commercial Banking at Pawtucket Credit Union. “Angie understands the challenges small business owners are facing and works closely with them to ensure that they feel confident as they move forward to realize their dreams of owning a business.”

“It has been very rewarding being able to work with small businesses every day and be part of their success story,” said Laperriere. “I love to hear about what drives them, challenges they face, and providing them with the financing and assistance they need to either get their business off the ground or take it to the next level.  I take pride in my job and helping others succeed and am very fortunate to be able to do what I do,” she added. The pride she takes in her job is evident in the relationships she has built with her clients. These are relationships that do not end with a loan closing, but instead continue with support in all aspects of the business. Afterall, doesn’t every small business deserve a champion? 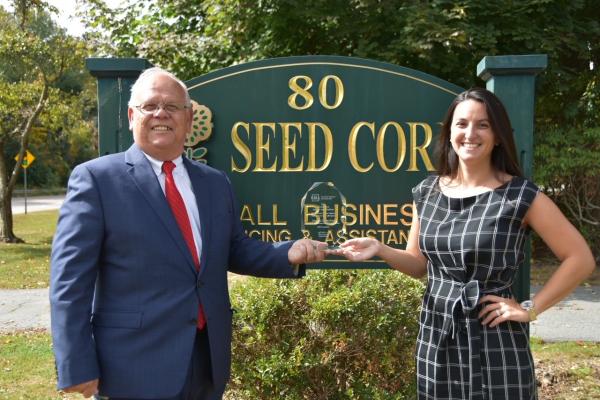 [May 13, 2022]  U.S. Secretary of Commerce Gina M. Raimondo announced that the Department’s Economic Development Administration (EDA) is awarding SEED a $3 million grant to capitalize and administer a revolving loan fund. This grant is funded by the American Rescue Plan. This grant will be used to provide gap financing to small, local businesses in Barnstable, Bristol, Dukes, Essex, Nantucket, Norfolk, Plymouth and Suffolk counties as they recover, grow, and create new employment opportunities. This EDA grant will be matched with $750,000 in local funds and is expected to create 100 jobs, retain 150 jobs, and generate $7.5 million in private investment, according to grantee estimates.

[February 24, 2022]  Governor Baker announced yesterday that the Commonwealth of Massachusetts has made $75,000,000 available to support small businesses negatively impacted by the COVID-19 pandemic. These funds will be administered through two different grant programs, the New Applicant Grant Program and the Inclusive Grant Program, are being provided through the Massachusetts Growth Capital Corporation.

[December 23, 2021]  SEED Corporation has selected Baldies Pizzeria of Lakeville, MA as the 2021 recipient of the Small Business of the Year Award. This family-owned and operated restaurant was established in 1998 by owner Mike Mastrangelo and specializes in gourmet brick-oven pizzas, as well as subs, tacos, soups, salads, and a wide variety of other main dishes. They also offer an extensive menu of craft beers (40 to try!), wines, and hard seltzers.

[December 21, 2021]  SEED Corporation has selected Chris Cooney of the Metro South Chamber of Commerce as the 2021 recipient of the "Gus Yankopoulos" Regional Business Advocate of the Year Award for his volunteer service to SEED over the last 21 years. Established in 1999 in memory of Gus Yankopoulos, the award is presented annually on a merit basis to an individual who has performed exceptional work on behalf of the region’s economy. For the last 22 years, SEED has presented the winner with a Lucky print by the late local artist Arthur Moniz.

[December 15, 2021]  SEED Corporation has selected Eve Elliott, Vice President of the Business Banking Group at Rockland Trust, as the 2021 Banker of the Year. This award is presented annually to the lender who partners on the largest number of loan projects with SEED and exemplifies the spirit of small business services.

SEED Corporation is a certified lender in Massachusetts and Rhode Island.